Year 6 did an amazing job of finishing their debating on drugs.

They were exceptional in working in two large groups. The organised themselves, created an order and sorted main points.

It was impressive team work.

When the debating began, it was clear each side were out to win.

They were courteous while others spoke, stood up to counter argue a point and were well spoken.
The debate question was “Should we legalise all drugs.”

The “for” team had some excellent facts and definitely a lot of passion. Great facts-including the boy in the news who needed an illgal drug to manage his severe and chronic pain. He was denied it because it was illegal to use regardless of the fact that it was the only thing that relieved his pain.

The “against” team were full of hard facts and determination. They put up a worthy debate. They were a great group, but on points, they were just pipped to the post by the “for” team. Boundless passion and counter arguments won them the debate.

Year 6 put their debating skills to the test this afternoon! They have been researching and discussing drugs. It seems there is more to drugs than we initially thought. Medicines are drugs but are named as such to show that they are used for treating illnesses, but even they can be harmful. We discussed key words such as limits, overdoses, legal, illegal, recreational, depression, highs and prescriptions.

After researching types and adverse affects of drugs we discussed why some drugs are classed as illegal. Some children wanted to know why there were restrictions on drugs, when they help people get better.

An excellent point, which led us to playing out a scenario. This then led us to writing points FOR and AGAINST legalising a new drug. The class researched lots of key facts and began to write them up.

Today we shared some of our ideas and next week we hope to have a full debate on the matter.

Some of the key points made so far were: 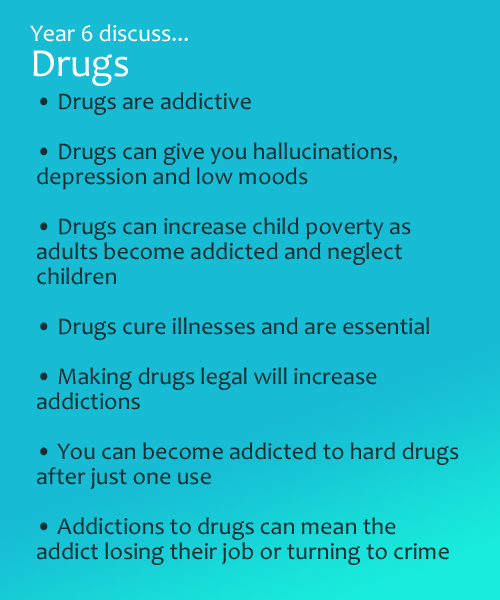 Watch this space to find out which side wins…