Year 6 Gardening Club is steaming ahead and we have been involved in some really fun tasks.

We have built a pergola that will be placed at the entrance to our fruit & veg garden in the playground. The team set about it with their screwdrivers and it was built in no time at all. (They’re a talented bunch!)

Next it was painting the fruit & veg boxes. I’m fairly sure there was more paint on the children (especially Morgan) but they thoroughly enjoyed the job and the boxes are starting to look amazing!

We’re hoping to finish these after Easter and then we can start our new project. It will be the biggest challenge we’ve had so far. So keep checking our blog and you can share in all our adventures. 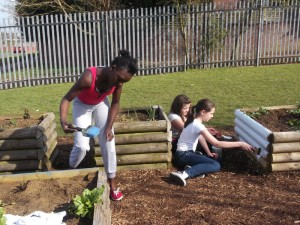 Year 6 have been learning all about Forces. Last week they were asked to design and construct a parachute that would carry an egg (not hard boiled!) to the ground without it breaking.

They were not given any instructions, just a selection of materials. It was up to them how they made it. The children were put into small groups and they set about making their parachutes, using their knowledge of air resistance.

This week the parachutes were tested. With the help of our very own Mr Evans, who climbed a ladder strapped to a lampost, the test was carried out.

The results were as follows:
Team Morgan: (small black & red bag) The egg cracked on landing.
Team Ashley: (small pink & black bag) Their egg smashed completely on landing.
Team Liza: (white carrier bag) They felt their egg was not secure and sadly it too smashed.
Team Alex J: (sainsburys carrier bag) Their bag was not open enough and the egg cracked on landing.
Team Amal: Theirs was the only egg that did not crack! The bag was only medium sized but opened fully and brought the parachute down safely without cracking.
Team Mia: Although this team used a bin liner, it did not open properly and therefore the egg smashed.
And finally, Team Jervay: This team felt that although they had used a large enough parachute, the strings supporting the egg were unstable and sadly the egg cracked.

The children were able to explain why the smaller bags were not suitable, as not enough air resistance was created, and gravity pulled the eggs down to the ground too quickly.

They now understand that the larger the parachute, the more air resistance is created. This works against the force of gravity and the egg is brought down at a slower speed and does not break. Well done to the winning team: Amal, Aleks and Shola!

Now using all their new knowledge, year 6 cannot wait to make a class parachute to test.